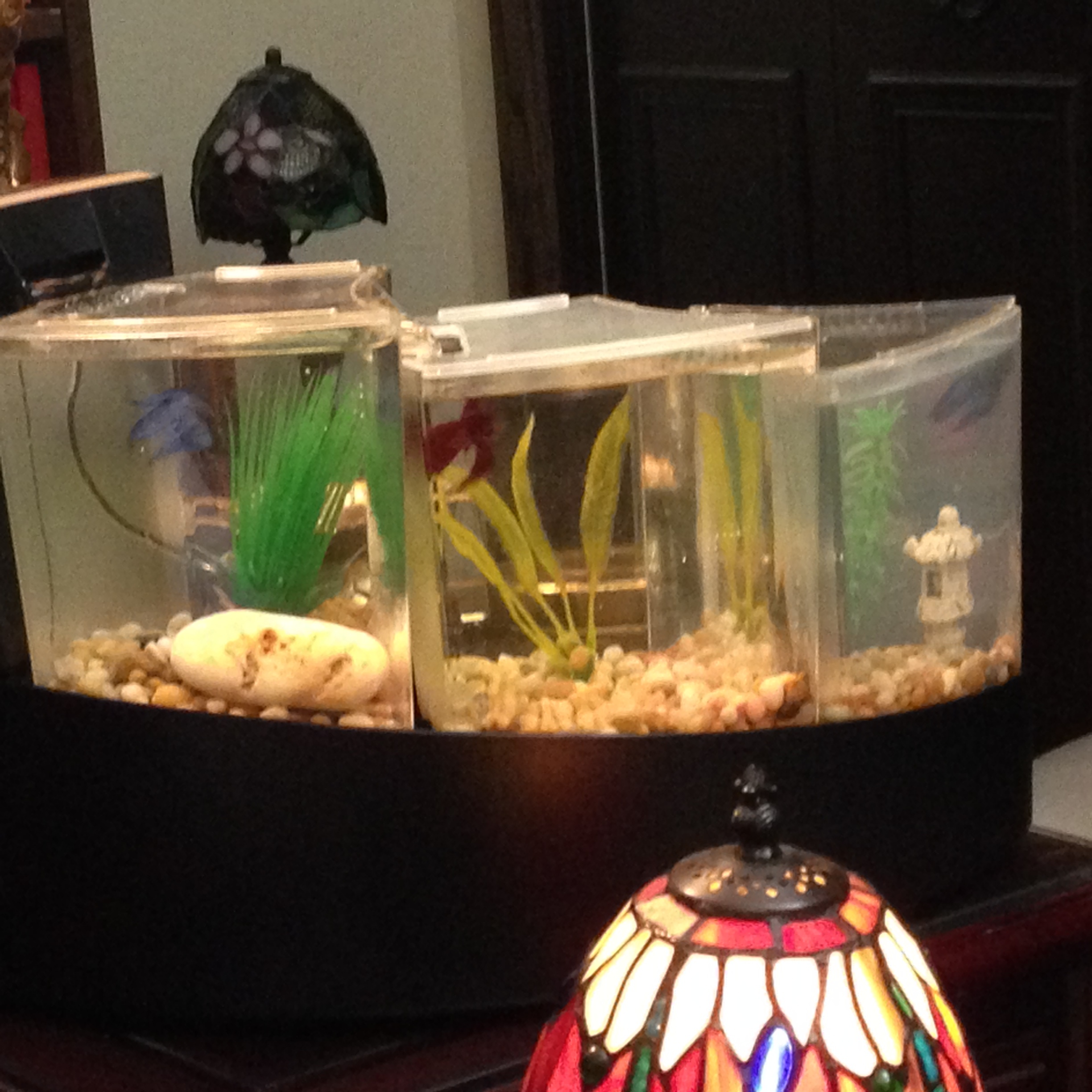 I have never been much of a domestic animal person.  Give me sharks, wild cats, hummingbirds or just about anything you’d find on Nat Geo WILD or PBS Nature any day, but I can usually take or leave most dogs or cats.  The “however” there is that I have had a deposit on a wishful thinking Siberian kitten going on five years now.  The facts that I currently have a roommate, live in a 550 square foot apartment and have serious cat allergies have deferred my kitten purchase for a while, but I do love to see the photos of the new kittens from my chosen breeder every few months.

But, I digress…the one staple that has been in my own animal kingdom is Betta fish.

Whether it is in my apartment in New York, or in my parents’ home in suburban Sacramento, there have been pet Bettas for the bulk of the last ten years.  I associate an active fish with having a personality, while the listless ones are a little less interesting.  Watching them swim is therapeutic and makes me happy.  My friend Denise doesn’t get my fascination with my pet, nor does she really believe that my Bettas are pets, but she is a dog lover, so she’ll get a pass.  To me my Bettas are pets, and I love to watch them in their cool wall habitat that I have for them, and I mourn them briefly when they pass on.

Betta fish can live between three and five years.  Most of ours hover at around the six-month mark.  All of mine with one exception had names that begin with an “F” sound.  To name a few, there has been Phillipe, Frank, Fanta, Frederick, Fernando, Francis, Phineas, Filbert, and Folly.  Oh, Folly was a special guy.  He lived for four years and was a fun fish.  What makes that even more unique is that he lived for three-and-a-half years after he accidentally landed into my glass of Jack Daniels while I was cleaning his bowl.  First, I panicked, then plucked him out of my cocktail, and quickly threw him into the relative safety of his changing bowl.  Once catastrophe was averted, I finished my drink.  I think the booze fortified him, but I haven’t actively tested my theory on subsequent fish.

Most of the time, the Bettas live their lives in their bowl on my wall with limited diversion, except on their cleaning days once a month.  My only non-F fish was Options.  I named him when I was between jobs and wanted an optimistic name for my new pet.  Options may have thought differently.  When I took him out of his bowl and into his changing bowl while I cleaned out his home, I left him on the counter while I took a shower.  When I came out, the changing bowl was missing a fish.  There on the floor was my little teal fish, stiff as a board.  When I told people about his demise, I added that “I never knew he was depressed.” I went back to naming my fish with F-names.  Forte is the current occupant of my wall tank.

Now enter my dad.  He has Bettas too in a beautiful gallon aquarium with lights and pretty plants and decorations.  While on my visit last weekend, Romo, his Betta of six-months was found fins up in his aquatic home.  We cleaned the tank and headed to our favorite neighborhood pet store, Aquarium Depot on Auburn Blvd. in Citrus Heights and picked up a beautiful golden Betta that my dad dubbed Primo. (Side note about Aquarium Depot:  what a great place!  They have everything for your fish and reptile needs.  The people are pleasant and knowledgeable, the selection is amazing (their huge tortoises are impressive and it is just like having a little zoo in the neighborhood—check it out if you can.)

Within a day of having Primo join the family, my dad was given an aquarium for three Bettas. We set up the tank and headed back to Aquarium Depot.  As it was their anniversary weekend and the store was packed, only three Bettas were left in the entire store.  As three was what we needed, it was serendipitous. The fish were named Ibe, Yoube and Webe. The tank is set up so they can’t see each other and get stressed out, but I think these particular fish knew that the others were nearby, and they didn’t like it.

At first, they seemed to adapt, but within two hours, the fighting nature of these fish took over and Ibe jumped from his tank to Yoube’s tank and started to attack.  We couldn’t find the net, and my sister who was over for a family dinner ran to the kitchen, got a slotted spoon and fished Ibe out of Yoube’s area before any fatalities ensued.

We thought that these breeches could happen again, so we lowered the volume in of the water in the tanks, and hoped for the best when we went to bed.  Upon waking, Ibe was nowhere to be found.  He was missing.  Yoube looked guilty.  Now as these are cannibalistic creatures, it wouldn’t have been surprising to see Yoube looking fat and happy, but there was no evidence of a carcass. We checked the floor and table, but there was nothing to be found. Ibe had disappeared.

Just before holding a tribunal, my dad received a call from the original owner of the aquarium who told us to check under the tank as it has a false bottom to see if Ibe was there. My mom’s caretaker, Renee and I took apart the tank, and saw nothing.  Ibe had vanished.  Then, I lifted the filter, and lo and behold, there was a petite blue fish—hiding, but alive.  It took another few minutes to get him back into his area, but we succeeded.  He looked smug and Renee chided him. So, over the next few days we played with water levels and I think we have it right, though you could see Ibe trying to get up enough speed to jump to Yoube’s tank. The lid temporarily thwarted him.  So, once again we moved the fish around.  Now, Ibe is at the end and Webe is in the first spot.   Ibe still seems to be plotting something.

Now Renee is an animal lover, and she would begin her work day greeting all of the wildlife.  “Good morning, Primo.  Good Morning, Yoube.  Good Morning Webe,” she cheerfully exclaims.  She no longer greets Ibe as she believes him to be mean.  He may very well be…